by admin
in Bitcoin
0

Earlier this week, a death cross formed on the Bitcoin charts, threatening to extend the benchmark cryptocurrency’s decline as it corrected lower after setting up a record high above $61,000 last week.

But a policy update from Federal Reserve late Wednesday reversed Bitcoin’s interim bearish bias. About 18 of the US central bank governors said they expect to hold its short-term interest rates near zero through 2023. Meanwhile, seven anticipated that they would hike lending rates in 2022 or 2023, up from five in December.

Since April last year, the Fed had been buying $120 billion worth of government debts and mortgage-backed securities every month. Their policy has resulted in negative bond yields. Meanwhile, benchmark rates between 0 and 0.25 percent have made the US dollar borrowing cheaper, pushing the greenback lower by roughly 12 percent against a basket of top foreign currencies.

For investors, holding cash and bonds promises minimal returns. That has forced them to take risks in alternative markets, including Bitcoin, whose value recently exploded upward by 1,500 percent from its mid-March nadir of $3,858. Bitcoin’s appeal lies in its 21 million supply cap, making it a digital equivalent to gold, a traditionally scarce safe-haven asset.

Therefore, the cryptocurrency typically benefits from a lower-yielding bond market and depressive fiat currencies. That somewhat explains why it rebounded on Wednesday, right after the Fed declared that it would keep its easy-money policies in place while vowing to maintain them until the US economy recovers from the aftermath of the coronavirus pandemic.

Bitcoin rose from the intraday pits of $53,000 to close session 3.64 percent higher at $58,925.54. The cryptocurrency further extended its jump entering the early Asia-Pacific session Thursday, touching $59,576 before turning lower on profit-taking sentiment. Meanwhile, its jump reversed the death cross into a golden cross. 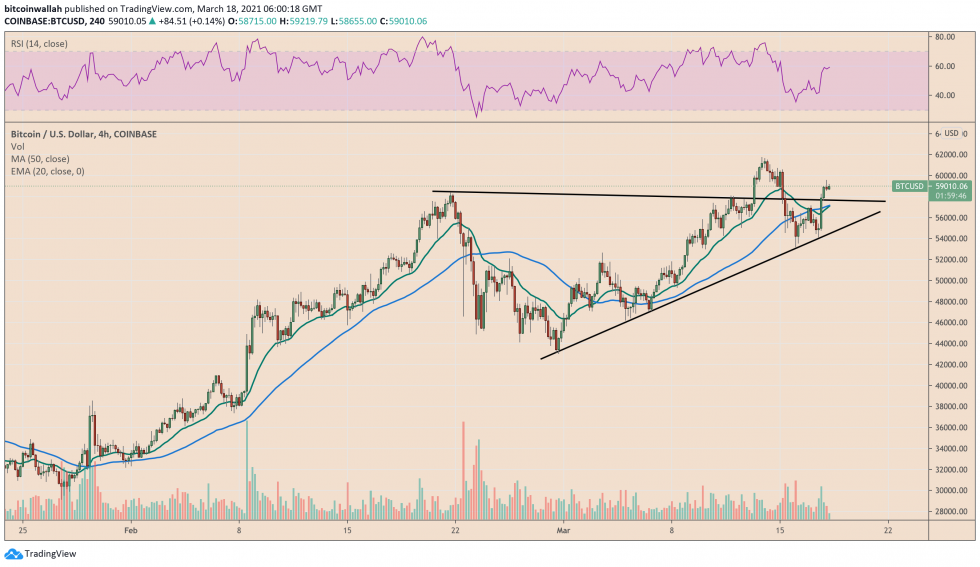 The cryptocurrency now shows the likelihood of retesting $60,000 for a bullish breakout.

“The IOMAP indicator reveals that the last level of resistance is located between $58,879 and $59,241, where 220k addresses previously bought 73.95k BTC,” said data analytics firm IntoTheBlock. “After that, clear skies towards new highs.”

More tailwinds for Bitcoin’s bullish bias come from Morgan Stanley’s latest revelation that it would offer its clients access to three Bitcoin funds. The move logs another significant milestone in the cryptocurrency’s growing adoption among mainstream financial houses, raising hopes that institutional investors would allocate it into their traditional portfolios.

Meanwhile, the only red flag that appears in the ongoing Bitcoin bull run is the rising yield on the US 10-year Treasury note. The longer-dated interest rate return finished at 1.641 percent on Wednesday, up from 1.622 percent close on Tuesday. 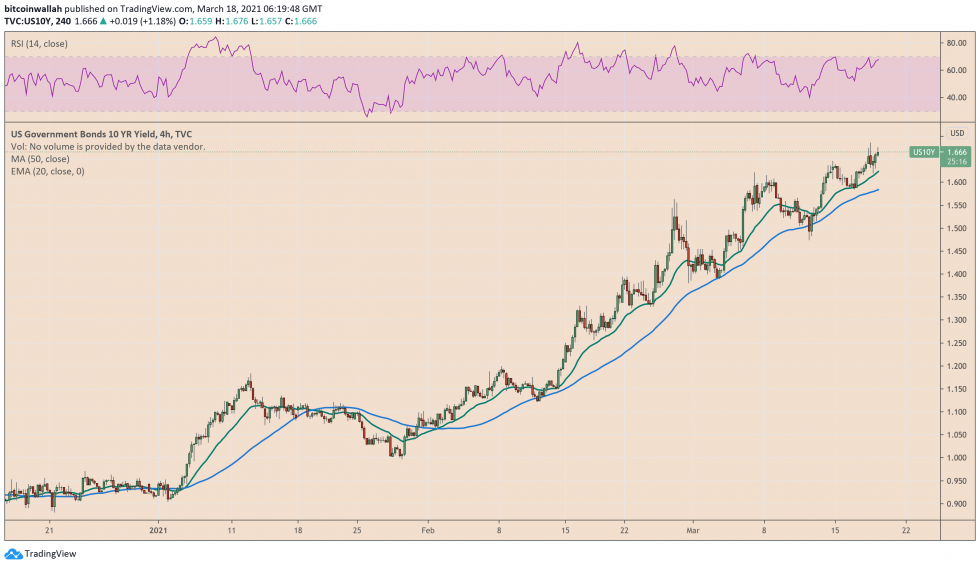 Fed officials made no mention of the recent rise in the 10-year Treasury yields, not any policy update to combat those jumps. They instead acknowledged that US economic indicators are improving at a faster rate than anticipated in December. A sell-off in the bond market may continue to limit Bitcoin’s upside movements.

Bitcoin Expects to Run Sideways or Down Until Spring 2021: Analyst